In a year with federal and state elections and with a big increase in healthcare spending, we should talk about how we could improve our health system, so it’s not always struggling to cope.

That’s why I asked people in my electorate to tell me about their personal experiences with the health system and what they'd like to see improved.

Why did I run a survey?

During January our hospital and ambulance system struggled to function with over 1200 COVID patients occupying beds at the peak of the Omicron wave. That’s equivalent to at least two large public hospitals, full of COVID cases.

Some people died while waiting for ambulances. Elective surgery and even some urgent cases were postponed. I described this in more detail in February.

A healthcare system needs to be guided by the values and needs of those it serves. With Federal and State governments increasing health spending, I was keen to hear the suggestions and ideas from people living in Brunswick and surrounding suburbs.

I’m impressed by the number of people who took the time to fill out the survey. In just a couple of weeks we gathered 447 individual responses.

Most people described their own experiences in the health system, as either patients, carers or health workers, and this helped me understand what has really going on beyond just the numbers and headlines.

I was really pleased to see that so many people in my electorate want to see free, high quality universal health care, provided by well-trained staff with good working conditions.

We know health workers have endured two difficult years and are still managing large numbers of COVID cases and many others with neglected or late-presenting disease, because normal health care was disrupted for so long.

There were at least as many positive stories of people’s experiences in the responses, as negatives, and the positives were largely down to impressive work by health staff.

But people in Brunswick are also frustrated.

We feel that there aren’t enough staff across the health system: paramedics, nurses, specialists (in the public system), public dentists and mental health staff.

We think that too many ‘caring’ professions are undervalued in terms of salary and conditions compared to the true value of their work.

GPs are the backbone of the system, but they are costing more to see even for a simple consultation, because the Medicare rebate has not kept pace with the cost of running a practice.

And we recognise that people from disadvantaged groups are the most likely to wait or do without care, and the least likely to be reached by preventative health messages.

Thanks to everyone who responded, I have read every response and acknowledge the many issues raised beyond those addressed in the summary below.

All of your responses have helped to shape my commitments as your local state member and the Victorian Greens Spokesperson for Health.

The bar chart below lists the parts of our health system that people think most need improvement. Some of these areas overlap and there are many important parts of healthcare that are not mentioned, so it would be wrong to conclude that issues not at the top of this list are unimportant. 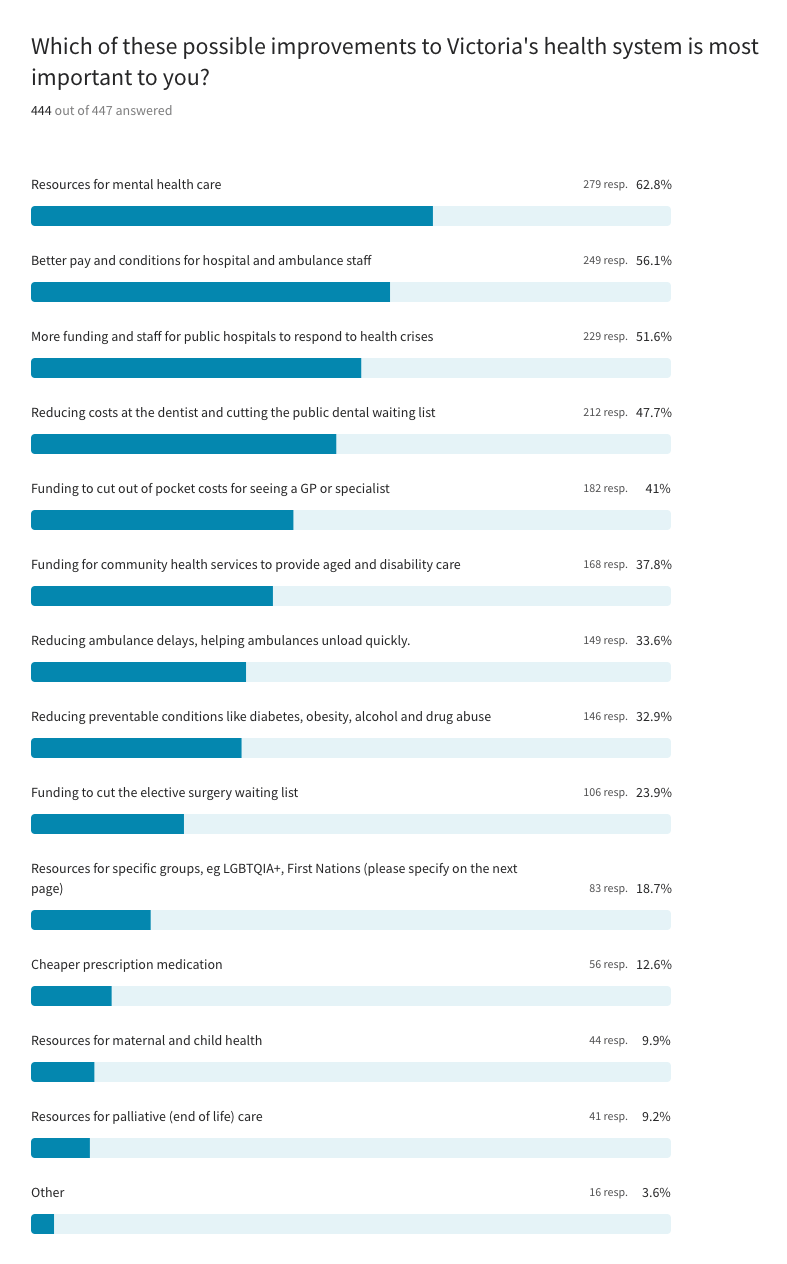 I was not surprised that so many respondents raised mental health as a key problem in the current system. It was a crisis before the pandemic, and it's worse now.

The main concern raised was the time and effort required to see a psychologist or psychiatrist – clearly there aren’t enough in the public system, and too many people cannot afford private care.

People also discussed the limit on Medicare-funded psychologist sessions, and the difficulty accessing GPs to get a mental health plan before being eligible for the subsidised sessions – ongoing specialist treatment is often required and can be prohibitively expensive.

"Thank you for the 20 sessions. Could we please have more staff in the mental health sector (psychologists, social workers, psychiatrists, counsellors etc.) to take on all the extra work? They also all need to be paid better” - Respondent from East Brunswick.

Following the Royal Commission, it is clear that all sides of parliament are now promising major investments in Victoria’s mental health system. This is a good thing, but I will be particularly looking to see whether these announcements address the need to replenish our depleted mental health workforce and whether there is a significant increase in psychiatrists working in the public system.

Better funding for hospitals and better pay for staff

There is a clear message here. Nurses, midwives, paramedics, allied health and other hospital staff are underpaid for the work they do.

It means fewer people are entering these professions, and it means a high attrition rate due to people leaving.

For too long politicians and governments have praised these workers as 'saints’ and ‘angels’, rather than paying them fairly for their essential work.

Survey respondents wanted health and hospitals to be a greater priority for state governments, and they recognised that to build the best system means investing more in it.

"Don't understaff and overwork the healthcare system. In the long term it will cost more. Respect healthcare staff and pay them properly so that they stay in the system" – H from Fitzroy North

About six months ago, during the wave of Delta variant infections, I supported a successful nurses campaign for a wage increase to recognise the additional work placed on hospital staff as a result of COVID-19. I will continue to work closely with health unions to support their campaigns for better wages, conditions and training.

It’s clear to me that the community want health to be among the highest priorities of state governments. This can’t just be big announcements – ongoing funding needs to be allocated at budget time.

The current government has prioritised prisons and police, and has grown spending more in these areas than to the health system – the Greens will advocate that we redirect these billions from these priorities and into health, housing and education.

Respondents recognised the critical problems in public dental care, an issue that is frequently overlooked by government and the media.

Waiting times for general dental care have now increased on average to 24.8 months across Victoria, the worst delays in this decade. 34,000 patients have been forced to wait more than three years.

"I have spent a few thousand dollars on dental costs to treat my gum disease. As a previous Health Care Card holder I could never afford dental treatment. Dental should be subsidised to prevent future disease" – J from North Fitzroy

The problem in public dentistry is, like many health issues, one where both the State and Federal governments blame each other for not funding enough, and so nothing gets done to fix the crisis in front of them.

The Federal Greens position has always been that dentistry is an essential part of healthcare, and so it must be included in Medicare – ‘Denticare’.

But we can’t just wait for the Greens to be able to negotiate a federal fix (as part of 2010 agreement with Labor, the Federal Greens got dental into Medicare for 3.4 million children). We also need action at a state level.

So I continue to work closely with the Australian Dental Association Victoria Branch in their efforts to bring Victorian dental waiting lists down from these record levels in the short term through more state funding, while supporting the long term solution, the federal Greens Denticare.

This has only scratched the surface of the problems besetting Victoria’s health system. I am still working through the written responses to the survey and talking to unions and professional bodies so I’ll be learning a lot more over the next month or two.

And our health system is still under stress. The number of COVID patients in our hospitals has been steadily increasing from a low of 175 in mid-March, to 445 on 28 April. At least 80,000 Victorians are waiting for surgery, postponed by the pandemic.

We can expect state and federal announcements of billions of dollars of necessary funding for the hospital system. But it’s clear we wouldn’t have designed the system we currently have from scratch – major reform is needed. And right now, our community may be more receptive than usual to the idea of change, so that’s the work I’ll be focusing on.