A 2019 VicRoads survey of over 7,000 people found more than half wanted protected bike lanes, regardless of their reason for visiting Sydney Road, or their mode of travel.

People in Brunswick want protected bike lanes, wider footpaths, accessible tram stops and more trees. And with more than double the number of people riding since the COVID-19 pandemic hit, now is the time to build them.

Sydney Road has been a main area of focus (you can read more about that here) but we need more bike lanes across our neighbourhood too – Lygon, Nicholson, Melville and Glenlyon could all do with some improvement, for example.

More protected bike lanes in Brunswick will improve safety for bikes, pedestrians and motorists, and will encourage more people to choose active transport – improving the health of our community and reducing pollution.

Early in 2019, my office surveyed over 800 cyclists about how safe they feel riding around Brunswick.

Read more about our research in our Bike Safety in Brunswick: The Case for Protected Bike Lanes on Sydney Road report below.

Get a free copy of our special report Bike safety in Brunswick: The case for protected bike lanes on Sydney Road sent to your inbox. 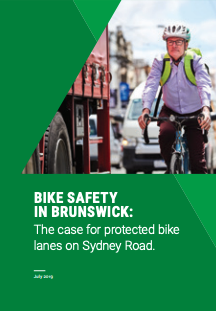 How safe is riding around Brunswick?

Our survey indicates the common perception, that riding a bike on Sydney Road is unsafe because of the close proximity of motor vehicles, is grounded in reality.

While the unprotected on-road bike lanes on Sydney Road provide a narrow space for people on bikes during clearway times, at all other times bike riders are squeezed into a narrow strip flanked by moving vehicles on one side, and drivers opening doors of their parked cars on the other.

The capacity of the Upfield Shared Path as a major commuter route is limited. It's a very busy pathway shared by many – large commuter bikes, bikes with trailers for children, delivery riders, students, and family groups with young and inexperienced riders, as well as joggers and walkers.

At its narrowest points the path is little over one and a half meters wide, creating bottlenecks where cyclists and pedestrians moving in different directions attempt to squeeze past each other.

As Brunswick's population continues to grow, and more people look to riding bikes, we'll need more options for north-south travel. The Upfield will be improved when overhead rail is built in 2027. But with that still half a decade away, and demand for bike and walking options only growing, we need to upgrade more of the roads around Brunswick with better bike and walking paths.

It's time for change

There is broad agreement among policy makers that public transport and active transport (walking and riding) are the best transport modes to address current and future congestion in Brunswick.

Already, more people ride to work from Brunswick than from anywhere in Australia. But widespread concern about sharing roads with cars holds a lot of people back from riding.

Consistent with many other studies, our survey indicates infrastructure that separates bikes from cars, either dedicated off-street paths or protected lanes on roads, will get more people on bikes by making them feel safer.

Building protected bike lanes on Sydney Road is not the only measure that will improve cyclist safety. Lighting, signs, traffic signalling and intersection treatments are also vital to making riding safer. However, protected bike lanes do appear to be the key to increasing cycling participation.

Improving the Upfield Shared Path to become the sole major commuter route is not viable. We need safer East-West routes, as well as safer bike lanes on Sydney Road, so people can get to the shops by bike.

Although the removal of on-street parking and creation of permanent, protected bike lanes on Sydney Road is likely to be opposed by many businesses, the evidence suggests the potential effects on businesses are minimal, and may actually be positive.

Giving Sydney Road separated bike lanes will not only move more people more safely, it will make it a more attractive shopping destination.

Help make Brunswick safer for people on bikes and pedestrians by joining our Brunswick for Bikes Facebook group.

More protected bike lanes in Brunswick will improve safety for cyclists, motorists and pedestrians. They will also encourage more people to choose active transport – improving the health of our community and reducing pollution.