Sydney Road could be much easier to walk or ride a bike along, and with a rethink we could make it a much nicer place to shop, hang out, eat and drink, or see some music – no matter how you choose to get around.

But to get there, we need the state government to step up and finally bring in the changes we know the community wants.

Here’s what I’ve been calling on the government to do:

I’ve already done a lot of work on pushing the government to support improvements to Sydney Road, you can read more below, and I’ll keep my work up in Brunswick and in Parliament!

Straight after the 2018 state election, I began asking the Victorian government to install separated bike lanes on Sydney Road.

It soon became clear that to convince the government, we needed more data and experiences from commuters who ride north-south to work and uni. So I surveyed bike riders in Brunswick, prepared a report, formed a Facebook group, met with the Minister for Roads and with local bike groups and traders, and held a forum.

The community told me loud and clear that they wanted Sydney Road, Brunswick, to become a more attractive destination.

Advocates for change pointed to the benefits to local trade seen in other cities that replaced parking with bike lanes and widened footpaths. They also pointed to the large number of bikes commuting to hospitals, university, and the CBD down Royal Parade, after battling the congestion around the train stations on the narrow Upfield path.

In May 2019, I raised the issue in parliament for the first time (and I have half a dozen times since). And then in June, VicRoads launched a large online survey, asking people to comment on four possible options for the road.

VicRoads was supposed to publish a report on the survey findings a few months later, but we heard nothing for almost a year. When the results finally emerged from a freedom of information request made by the Revitalise Sydney Road group, it came as little surprise to me that replacing on-street car parking with separated bike lanes was supported by over half of the 7000+ who answered the poll. 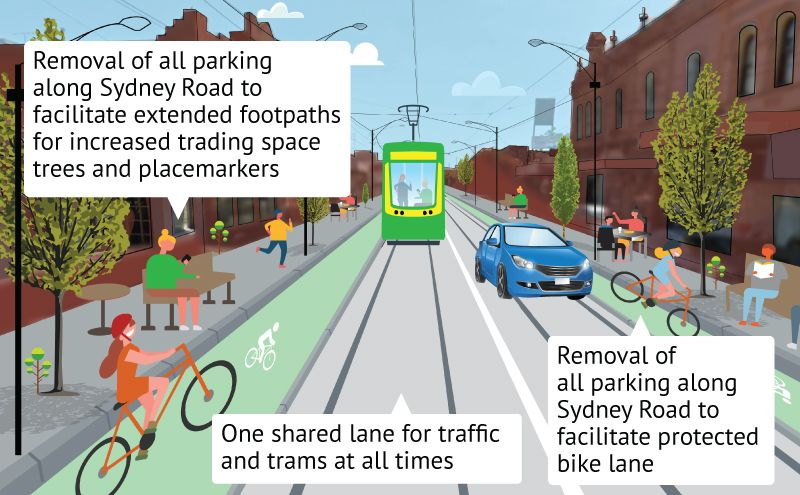 I hoped VicRoads would be guided by this result, and implement the changes that the community wants. Further encouragement came from a safety audit by VicRoads which showed the most popular option with separated bike lanes and wider footpaths was also the safest.

Moreland Council joined the chorus of support, voting to endorse the separated bike lane plan and, since it’s a state government-controlled road, wrote to the Minister urging a pop-up bike lane trial for the southern end, between Glenlyon and Brunswick roads. Bicycle Network and even the RACV joined the call.

It seemed bound to happen, except that disturbing noises had been coming from the state government.

In September 2019, Pascoe Vale MP,  Labor’s Lizzie Blandthorn, published a statement opposing a plan for separated bike lanes. The following month, then-Roads Minister Jaala Pulford told Greens leader Samantha Ratnam that the Department of Transport would not consider any proposals or trial on Sydney Road while Coburg’s level crossing removal project was underway. Clearly the Victorian Labor Government was stalling, despite the VicRoads survey and support from many other quarters.

In response to another of my questions, the Government indicated that nothing could be done until a business case was undertaken (despite the State Government’s $50 billion-plus suburban rail loop not having a business case). So I asked the Parliamentary Budget Office to cost the pop-up bike lanes proposed by Council, and in May 2020 they estimated the 600 metre trial would cost $300,000 (the 2018-19 total budget for transport infrastructure was $9.4 billion, by the way).

During our first COVID lockdown, the number of people on bikes increased dramatically. So I wrote to the Premier in May 2020, urging the government to trial a separated bike lane, as suggested by Council. The letter, signed by over 650 constituents, concluded:

“Rarely, if ever has a transport infrastructure initiative been so broadly supported, affordable, aligned with government strategy or immediately relevant to the prevailing social, environmental and economic conditions.”

Within a month, we had a new Minister for Roads, Ben Carroll, so I sent him the same letter and then met with him in November 2020.

The meeting was positive for most topics, but not on Sydney Road. While not completely dismissing the idea, he referred to the traders, indicated that separated bike lanes would be difficult, and said cyclists can just use the Upfield path. 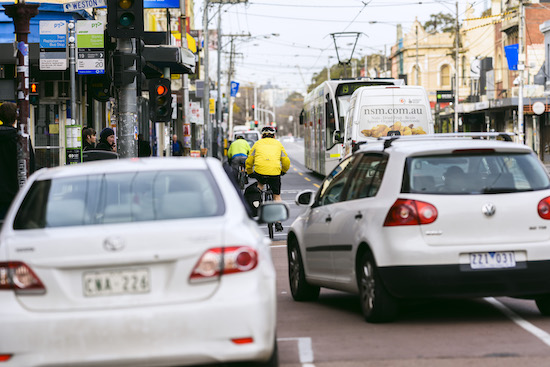 But of course Sydney Road needs more than bike lanes.

I met with local disability advocates and heard that the narrow footpath on Sydney Road is barely navigable for wheelchair users, and most of the shops aren’t wheelchair accessible.

There are no platform tram stops between Brunswick Road and the end of the line in North Coburg, making boarding difficult for prams and impossible for wheelchairs.

The footpath is devoid of greenery, so it heats up on summer days. It makes sense to fix all of these problems at once, starting at the southern end, where bike use is highest. But if there’s no immediate appetite for that, then trialling a pop-up bike lane south of Glenlyon Road would be a start.

So I urged the government to install accessible tram stops, restaurant extensions into parking bays, and to revitalise Sydney Road as a place worth visiting, rather than just a highway. I’ve even commissioned bike-themed murals around Brunswick. 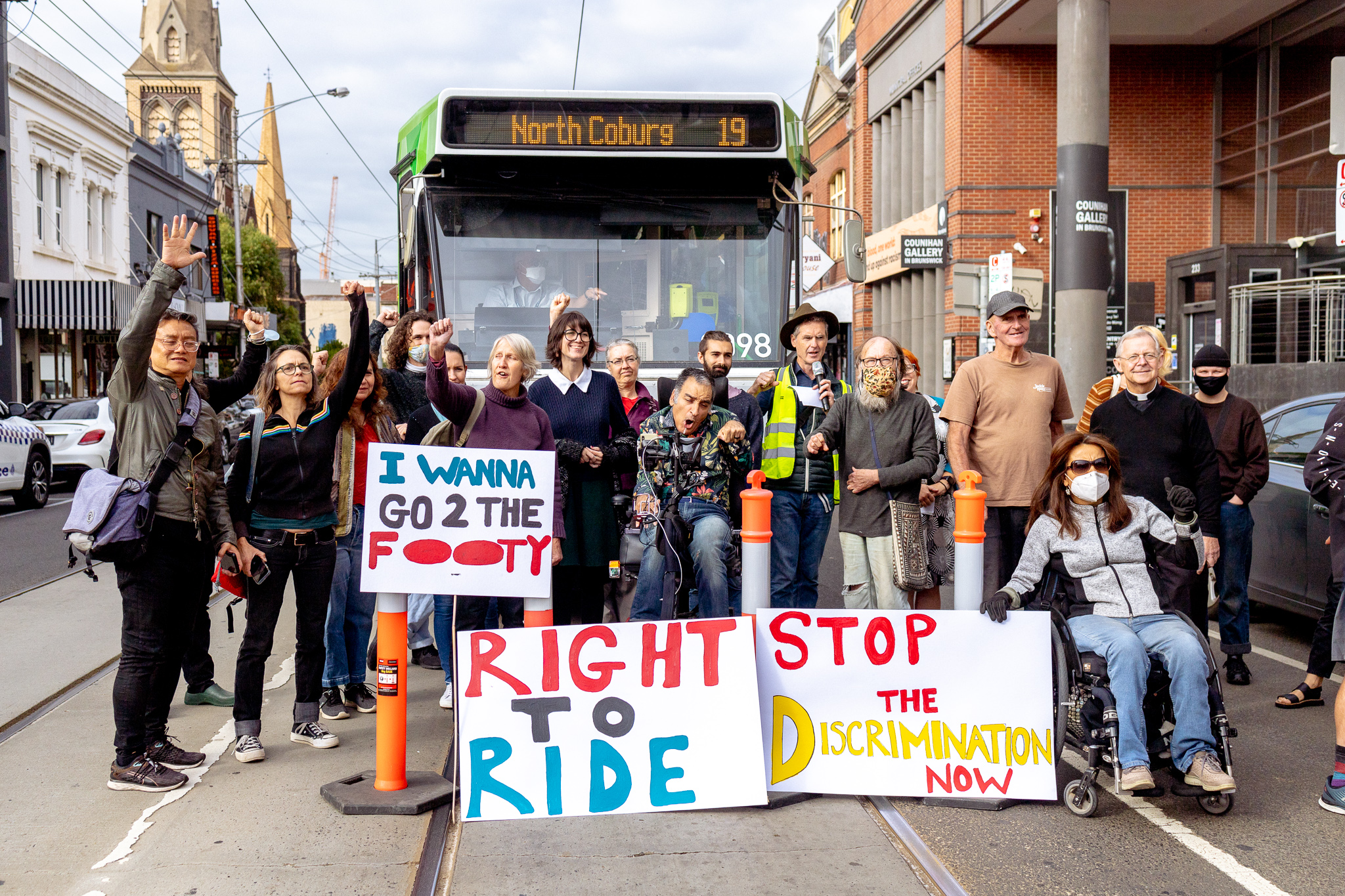 Much of the opposition to separated bike lanes comes from attachment to on-street car parking, despite the relatively low number of parks on Sydney Road, and the dozens of studies from across the world showing that replacing parking with bike infrastructure doesn’t harm, and can even boost, business.

Part of my work has been to challenge the idea that parking must be retained at all costs. And I’ve also used this issue to broaden the call for separated bike lanes elsewhere in Brunswick.

Another frequently heard argument is that the nearby Upfield path means there’s no need for a lane on Sydney Road. Nobody who has ridden south of Albion St along the path during a busy period, really believes this. While it's good that the Upfield path will likely be upgraded in 2027, this is still half a decade away. Plus the path will most likely be closed during the construction of the upfield skyrail, so I'm calling for, at the very least, a trial popup separated bike lane on Sydney Road for the duration of construction. Also, I recently invited the Minister to join me on a ride down the Upfield to see how narrow and congested it can be. He declined.

All of the above brings me to the recent letter I received from Minister Carroll, responding to my latest calls for a pop-up bike lane on Sydney Road. He refers to the 18,000 vehicles (including 1100 trucks) per day using Sydney Road, and the need for delivery vehicle access to shops.

The key paragraph reads: “The Department of Transport (DoT) has reviewed the proposal and does not recommend temporary pop-up bike lanes at this time. The operation of the Sydney Road corridor is complex and extensive consultation will be required to ensure the successful delivery of improved bike facilities and management of traffic, including tram services.”

It almost sounds like they want to restart the extensive review and co-design process that began in 2017 and culminated in the online poll, but really they’re stalling.

We know that more people are leaving their cars at home to avoid the worsening traffic congestion, and taking to bikes, scooters or walking. Walking and riding keep us healthier and cut carbon emissions. And the platform tram stops will be built eventually, so we need to convince the government that there’s no point delaying the inevitable.

They’ve run out of excuses and they’re short of ideas.

And if you haven’t already done so, add your name to my Sydney Road campaign page, so I keep you up to date as I keep pushing for change.